As the neon twisted around me it seemed like one of those perfect moments that just make your life worth all the hardship and annoyance. 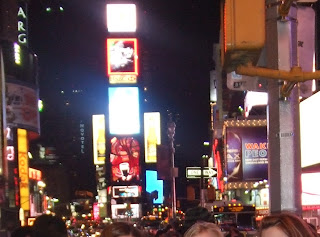 The four of us girls in Times Square; the day after the mayhem.

His kiss was like fire and ice all at the same time, the cold of his lips attacked by the icy weather and the warm fount that was his mouth. His hand wrapped around the back of my head, tangled in my hair, held me when I thought I might faint and his arm around my waist made me his. My morality couldn’t catch up with me in enough time to save my fragile conceptions of wrong and right; this kiss was like a tidal wave and I knew the aftermath would be the most deviant and orgiastic mistake of my life.

-------------------------------------------------
He says he grew up in the Bronx and he’d seen people die and had to walk in the middle of the street so he wouldn’t get jumped on a daily basis and yet his eyes were soft and yielding as if he only wanted all that he could find that would make life all the better. Aedan was our driver, my three girlfriend’s and mine on our spontaneous road trip up to NYC to see the big ball drop. When I saw him, all bundled up in a black wool trench coat and his black rimmed glasses on, he was all security and fantasy rolled into one, I thought to myself,

Aedan opened our doors for us as I looked him up and down, I judged him to be about forty-five; he had lightly gelled back light brown hair and one of those too-attractive-to-be-real faces and yet he wasn’t cocky at all. He ferried us around Manhattan all during the early afternoon until the middle of the afternoon when all the streets in the city were closed down due to the good old ball drop. All day he kept this tight leash on me and never really let me slip out of his sight, now and then securing us as we walked along bustling streets. At lunch we downed three bottles of Moet collectively and conversation slipped to the more taboo. Liz reaches across the table and points at Aedan,
"So what do you think about Petite? She’s a pretty hot little number, don’t you think?"

Her giggling reached a peak with the other’s as my cheeks grew a fiery pink. Aedan smiled a little embarrassedly and then took my hand which was on the table next to his,

With a wink and a look he kissed my hand and the heat from his lips radiated throughout my whole body. The girls’ faces were stunned but he didn’t look away from my eyes or drop my hand but instead, tucked it underneath his against his coat, pulling my face towards his, and just as I thought he would kiss me, he tilted his lips toward my ear,

“If I weren’t such a controlled Irish gentleman, you would be in ecstasy right now alone with me in some dark place.”

At moments like this one I always think: 'Why do men always choose me to reveal their innermost thoughts and urges?'

I bit my lip as he pulled away and the girls were all in a tizzy to know what he had said, I only brushed them off by saying,

Soon enough it was ten o’clock and time to try and navigate through the hell of a mob that had congregated around and in Times Square. He let us off near as he could to the square and went off probably to pay hundreds of dollars an hour to park in a reserved parking spot in a nearby garage. We wiggled our way, the four of us holding hands as Liz held onto to a bottle of Chandon, though the crowd.

We met some abrasive characters but by the end of it we had secured a pretty nice spot in the mire of all the people around us. We started to get worried about Aedan since it had taken us nearly forty minutes to connive our way through the masse of people, how would he get to us in time? In about as much time it had taken us to get to the center, Aedan popped up somehow magically behind me. The four of us shouted in a chorus of girly glee, but no one as much as me.

We stomped our feet for the next twenty minutes to keep the cold at bay and soon it was the witching hour.

You really can’t understand how incredible it is to in it all unless you’ve experienced it yourself. Its like all the little light bulbs in everyone’s heads went off and everyone becomes completely on the brink of insanity. I was so wrapped up in it all at about ten minutes until midnight that I hardly noticed Aedan wrapping his arms around my waist.

The countdown was on and my girlfriends and I were looking at each other and at the sparkling ball and yelling at the top of our lungs the numbers all the way down. The last thing I remember is getting the screamed sentiment of “HAPPY” out of my mouth before Aedan whipped me around and had his lips on mine like a torrent of fire.

The fateful kiss had been made.

When at last he pulled his lips from mine, he looked down at me and said,

“I’ve wanted to do that for hours.”

He smiled and hugged me hard against him as my girlfriends looked on in surprised and pleased awe. Have you noticed that your friends will look on your immorality with encouragement in the hopes of you “having fun” but they’re not doing the same as you are? It was kind of like that.

--------------------------------------------
It was about three am by the time we got back to our hotel owing to the most insane traffic I’ve ever seen in my life. The entire car ride I was waging a moral battle with myself in my mind over what to do. The whole ride Aedan was looking at me in that way men do when they think they’ve secured the prize and I couldn’t help but to admit it to myself that he as right. All it would take for me to jump off the edge of decision would be a word from him.

As he pulled to a stop in front of our hotel he put his hand on mine as it rested on my thigh and looked into my eyes,

“Come into the city with me, I have something amazing to show you.”

I only nodded and though my friends protested when I told them I’d be back later, my decision was set; I was leaping off the edge.

We drove on in the night, along the Hudson and near the George Washington Bridge and he told me as we drove though a huge stone brick arch that we were coming up to the Fort on the river.

He parked the car and when he let me out I was gifted with the most outrageous view of the city from one of the highest (natural) points in the area. The fireworks going off still in every direction in the distance combined with the lights from the city were just mind blowing. I sat down on the stone wall at the edge of the hill and just looked at him,
“You know why I agreed to come out here with you, don’t you?”

He smiled and nodded as he took slow steps toward me. He put his gloved hands on my face and looked at me gently,

“Somehow you just have me in this sort of crazy mind-fuck and I can’t help but think perverted thoughts.”

I laughed out loud and he quieted my laughter by kissing me slowly and passionately. His hands were powerful and yet still yielding as he cradled my face. I unbuttoned his coat and wrapped my arms around his body, my hands feeling the softness of his suit and tight, strength of his body. Our kissing became more fevered until at once he lifted his face from mine and breathily said,

“Not here, let’s go to my place. I can really treat you to something there.”

He took my hand as we walked back to the car and I just let myself slip from all my worry into a state of calm and acceptance; I had sinned this much, why no go the full way?

I'm so pleased to see you posting again my dear. I have been in the same sort of boat, intoxicated on life and letting one's blog fall relatively still and quiet. I simply cannot wait for the next installment.

Great story so far. Any chance that you finish the story and its aftermath before next new year's?

You know how to keep us wanting more...Can't wait!

It's official--she's in love. Notice there's no more Gadget stories, or other real ones. nothing on-going. Nothing timely either. Come to think of it, seems this blog has died. Time to go back to Jefferson for some fun

This blog is dead. Long live this blog. 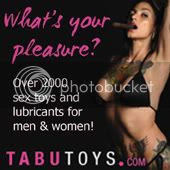 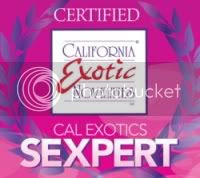